It takes a jury of 11 men and women to condemn a defendant to the death penalty. It takes but a single dentist to condemn a tooth to extraction.

This particular tooth, #14, was presented for extraction following an endodontic diagnosis of a root fracture.

The endodontist felt that the large area approximately at the mesial root and the distal root of #13 was due to a fracture.

The tooth had no mobility. I expressed to the patient that before I take the tooth out I would like to remove the mesial buccal root and see how stable the tooth is. If it was stable we could consider keeping it.

Following the root removal of the bony defect between the root and #13 was degranulated and the tissue submitted for biopsy. It was an unusual lesion, considering its anatomy and proximity to #13. The area was bone grafted.

The tooth was then referred back to the endodontist who completed the endodontics on the two remaining roots.

Once endodontics was completed and healing took place, the bony defect filled in on tooth #13.

Interestingly enough, the biopsy report came back as a foreign body material in the defect; something approximating an alginate material. 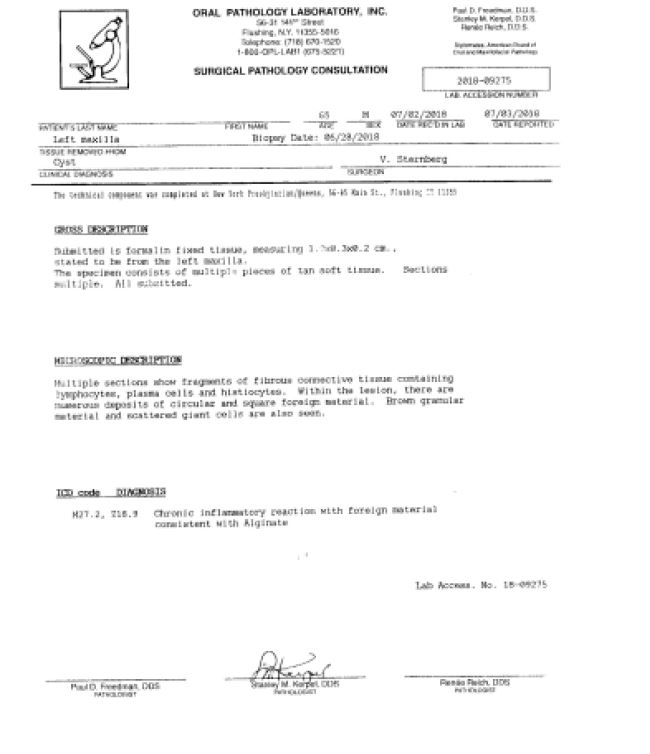 The tooth has been sitting in a temp now for about 6 months, with no sign of any mobility or probing depths, and appears to be a solid individual tooth that is capable of surviving long term.

Another treatment choice would have been to remove this tooth, do a bone graft then go back in and do a sinus lift and a single tooth implant.

Implants have made teeth more expendable than ever. In this particular case, a presumptive diagnosis of a fracture proved to be erroneous, and the unusual pathology rectifiable via debridement, a bone graft and a completed endodontic procedure.

It behooves us, in this day age where we have so many modalities for diagnosis, and especially the 3D imaging, to reconsider some of the diagnoses that we often rush into without a second opinion.

In the words of Ronald Regan, "we should always trust, but verify".

As always, I appreciate your feedback.