Lower anterior teeth face a particular problem due to the anatomy of the anterior mandible. Often a  mismatch between the width of the incisor and the dimension of the mandibular alveolar bone  results in very thin or absent bone, particularly on the facial aspect of lower incisors. The thinness of  the alveolar support can lead to severe loss of soft tissue and bone. The end result is the challenge  of how to treat, retain or replace lower anterior teeth.

I want to share two challenging cases that represent this particular issue.

Patient #1 had a history, well before I met her, of severe recession throughout herdentition.

This recession is genetic due to the wide roots at the CEJ are existing within the narrow confines of  the maxillary and mandibular bone.

The patient when I met her was 40 years old and was surprisingly comfortable with the aesthetics  that had incurred over her lifetime. Because of the severe facial inclination of the roots, root  coverage procedures by advancing soft tissue would have a poor prognosis since the alveolar bone  was so far apical and unable to supply support and blood supply for any grafting procedures.

The x-ray of the lower incisors when she presented shows teeth bonded together but as a group  showed some mobility even despite their splinting. Moving these lower incisors in the thin alveolus would preclude the possibility of placing implants to replace some since the alveolar bone was so  thin. The alternative was to make a fixed anterior bridge, from cuspid to cuspid, which the patient  wished to avoid at this point.

With some trepidation it was elected by the orthodontist to gently move these teeth together with  Invisalign orthodontics as mobile as they were, and then splint them together with an extra coronal  splint and wire that would provide more stability since the teeth would be more proximal. With some  trepidation this was done. Now, 12 years later, as current x-rays reveal, she appears to have some  mineralization of the bony crests. The teeth do not probe and fortunately the patient's oral hygiene  is exceptional and these teeth have surprisingly been maintained in a steady healthy state. 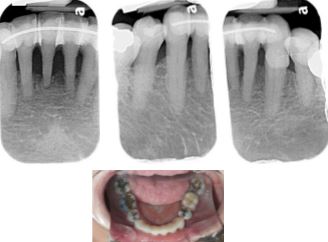 Patient #2 presented with active periodontitis. As you can see with the gutta percha point, one of  the teeth had a pocket that goes to the apex. The patient was desirous of retaining her teeth.  Surprisingly the lower incisor with severe bone loss was still vital.

In this case the decision was made to treat this periodontally to both correct the issue of the lack of  keratinized tissue on the facial leading to recession and further attachment loss, as well as the bony  defect.

13 years later we can see that she has regained a significant amount of crestal bone, most  specifically around the incisor that had bone loss to the apex. Again she maintains with an adequate  zone of keratinized tissue on the facial as well as enough bone to support these teeth indefinitely.

Both cases required patients that were extremely committed to their maintenance and oral hygiene.  In other cases this would not have been the outcome.