I shared this case earlier.  A 40-year old woman presented with severe periodontitis and had been recommended to have an implant supported maxillary prosthesis replaced.  She sought a second opinion.  There is no doubt that she had severe periodontitis involving numerous teeth, especially in the maxilla.  Given her youth and severity of her periodontal disease, she was offered the alternative of maintaining as many teeth as possible for as long as possible. 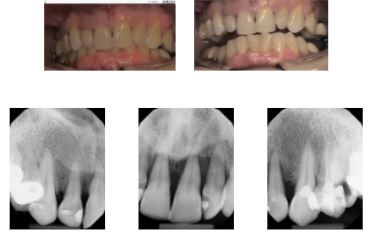 A combination of scaling with an endoscope and systemic antibiotics, based upon a culture, were administered.  Pocket depth reduction was attained from 9mm to 3-5mm.  At that point the teeth were still not aligned.  It was suggested to do Invisalign therapy to realign the teeth prior to splinting.  Because of the severity of the mobility the Invisalign trays were changed every 3-4 weeks.  Once the teeth were realigned anteriorly a lingual bar was placed to stabilize them.  At that point mobility was minimal.

Photos revealed significant reduction of pocket depth, however, there was severe recession as a result of the non-surgical care and gradual migration of the tissue closer to the osseous crest.

The patient, at that point since the teeth were going to be retained, desired an aesthetic improvement.

A direct bonding was performed which did improve the aesthetics for a number of years.  The patient was at that point satisfied to have her teeth, as well as having an improvement in the aesthetics following the severe recession that occurred during periodontal therapy.

Now, in the tenth year, the stability being continually maintained, the patient chose to have veneers placed.

Given her youth and propensity to develop periodontal  disease postponing the implants as long as possible was seen as an ideal approach.

Single rooted teeth, even with a nice attachment, can be maintained in a stable state for a long period of time, assuming the following:

1) The patient's commitment to frequent maintenance.

Given those two factors the patient has finally reached a state of stability and is happy with her new aesthetic outcome.

Treating teeth is infinitely more predictable than treating implants with perio-implantitis.  As the patient approaches 50-years old, she's had nearly ten years of her natural teeth with an aesthetic improvement.

Obviously there is more than one way to treat a patient with severe periodontitis.   However the ultimate goal is to preserve the alveolar bone and the health of the soft tissues. At least for this patient for almost a full decade that's been accomplished.